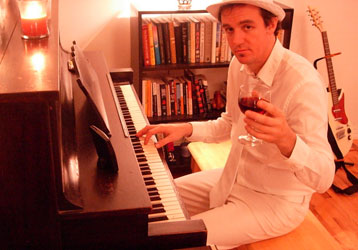 Pierre de Gaillande was born in Paris, France, spent his formative years in California, and has been living in New York City since 1994. He graduated from the University of California at San Diego with a Bachelor of Arts in Visual Arts and Media in 1993, and studied film theory and production at the Sorbonne and the Centre d’Etudes Critique in Paris, France in 1991.

Pierre divides his time equally between music and multimedia production.

Pierre began his musical journey playing trumpet in the school orchestra at age eight. He then moved on to bass and guitar as a teen. In California, he played in cartoon-jazz band Creedle and then formed his own band, Bunji Thump. After moving to New York, he played with country-pop band Morning Glories and C. Gibbs Review. He began to front his own band, Melomane, as singer/guitarist/songwriter in 1999.

Currently, Pierre writes songs for and plays guitar in New York bands The Snow and Melomane, and composes music for films, television, and dance. He also performs and records regularly with an array of New York bands.