The Illinois Brass Band was Founded in 1991 by George Foster and William Homer.

Now in it's 18th year, the Illinois Brass Band is made up of volunteer musicians from all of Chicagoland.

Throughout its illustrious history the band has won six NABBA championships, hosted the NABBA competition (1999).

All the while maintaining a regular series of 12-18 concerts per year.

The band has also made two trips overseas.

The first, in the summer of 2000, found the band competing with the best of English and Scottish bands in Saddleworth at the legendary Whit Friday March compettitions.  The Illinois Brass Band also toured the rest of England,on their "UK2K tour", playing numerous concerts with local bands for the balance of their two week trip.

The band also traveled to and competed in the British Open in Birmingham, England. 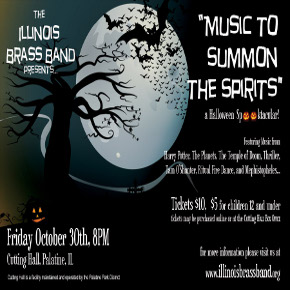