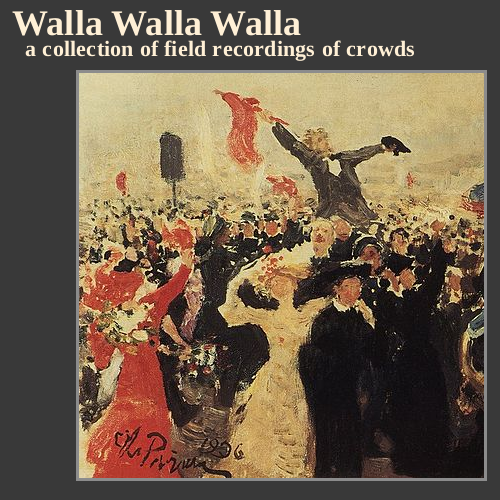 Walla walla is the American term for atmospheric crowd background sounds in film and radio. In Japan, it is known as gaya, rhubarb the UK, rhabarber in Germany, and rabarbar in the Belguim, Netherlands, and Scandinavia.

Film Sound describes it in this way:

A sound effect for the murmur of a crowd in the background. Walla is often use as subliminal aural communication and  sets a mood or a tone.

The word walla was created in the old radio days when they needed the sound of a crowd in the background. They found if several people simply repeated "walla, walla, walla, walla"  it sounded like people talking. The audience did not really hear the words, just the buzz of voices.

Walla may be field recordings of crowds or staged by actors. This collection features actual groups and crowds recorded all over the world and generously donated for reuse at Freesound.org.

Such recordings may be helpful to and appreciated by FMA visitors creating audio and video productions. The recordings have been normalized, standardized for bitrates, tagged, and converted to mp3s from various other formats for this Free Music Archive collection. Please see individual tracks for licensing.

Crowd Walla by gelo-papas is licensed under a Creative Commons Attribution License.