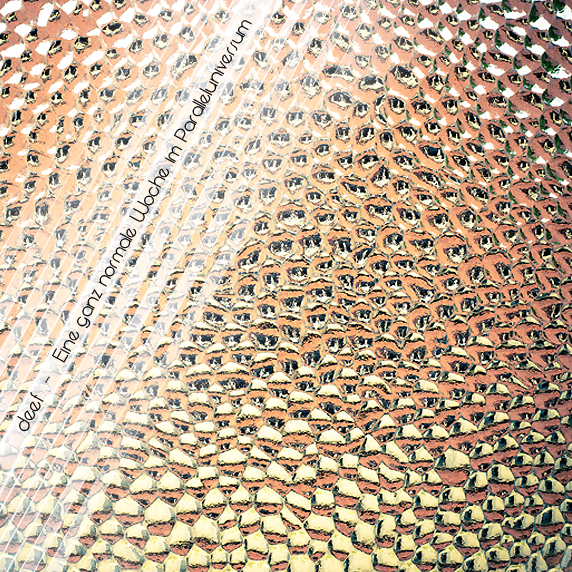 Imagine the following: You are able to experience an ordinary week in your own parallel unviverse, shift phase from alter ego to alter ego and find the many worlds you visit on your trip similar but also different compared to what you get to know in your universal life.

This is what deef’s current album “Eine ganz normale Woche im Paralleluniversum” is heading for. His album is considered to be an acoustic “Gedankenexperiment”: You are the visitor and protagonist at the same time. The moment you start listening to “Eine ganz normale Woche im Paralleluniversum” your temporal and spatial journey begins; and you will wander through the various universes that co-exist in any single track from the album.

Each track stands for the many parallel and individual universes.

Sometimes it’s obvious in one track that you slide from universe to universe. Another time it’s not to so clear and at the end of your musical trip you might have recognized the shift in space and time. The environment you find yourself toggles within one track; so keep an ear on it and enjoy the hyper unknown.

Basically German crowds say Germany doesn’t bear any new experimental and contemporary modern electronic music artist sending outstanding tunes through the aether! Well, folks it seems you haven’t noticed that we already have such an artist amongst us for more than a year! With his current album “Eine ganz normale Woche im Paralleluniversum” rec72 celebrates the second full length album by deef and we are proud to present Germany’s all time Electronica artists number one.

There is no such thing! As deef enhances his extravaganza with selected field recordings taken from the various spots he visited during the past year – since he has released his first album “Lebensbegleitende Musik” in 2008 on our label. His new album “Eine ganz normale Woche im Paralleluniversum” includes 8 extraordinary ambient and downtempo tracks; delivering an atmosphere which we normally expect from experimental music composers or rather find in psychedelic movies produced by David Lynch.

Travel through deef’s hypermusical universe for free. No worries you will return safe and sound to the correct time and space you started from!

Brainstation by deef is licensed under a Attribution-NonCommercial-NoDerivatives (aka Music Sharing) 3.0 International License.
For more permissions:
contact artist