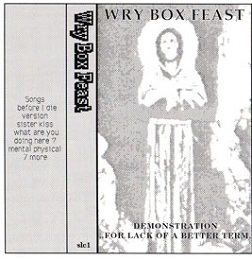 Recorded in the basement of a correctional high school on 4 track reel to reel and played out at Studio One (with I.D.K.), Escapades, Ringwood Manor Theatre (just before it was condemned) and a Lakeland regional high school dance.  The “Demonstration” recording was available on Cassette at early severed lips events.

Seven More by Wry Box Feast is licensed under a Attribution-NonCommercial-NoDerivatives (aka Music Sharing) 3.0 International License.