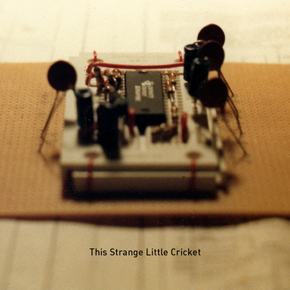 By the late-1970s, the Artifacts/yclept "collective" had tripled in size, with everyone involved intent on creating their own unique sound or sound language. From this distance, there's no way at all to begin to covey how many nights, days, and months of improvised experimentation went on deep inside the Capital of the Confederacy in the days between Altamont and the birth of MTV, but we stayed busy.

In 1981, after the release of the first two Bomis Prendin flex-discs, Wm. Burke (aka Key Ring Torch), who was living in a coat closet under the stairs at the Bomis Prendin house in Arlington, decided to put his own stamp on the Artifacts product line and assembled and distributed a cassette compilation he named, “This Strange Little Cricket.” His intention then was clearly to illustrate that Bomis Prendin wasn’t an entirely unique agglomeration, but was instead part of a larger community of likeminded mad scientists.