You came this way: Home > esc.rec. > Weerthof > Out Of Control > Pantoffle Skiffle 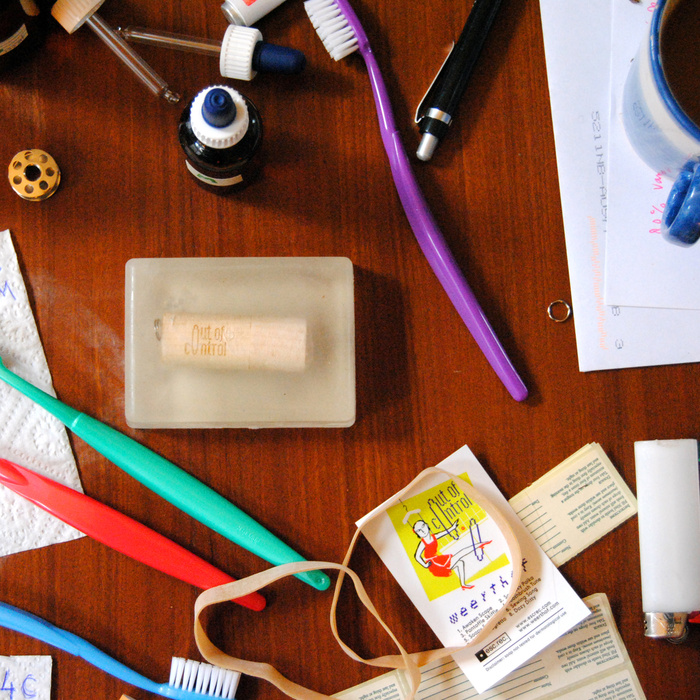 The Out of Control EP takes you on an electro-acoustic journey through a (not so) ordinary day.

Originally this music is the soundtrack for circustheatre play 'Huis op Hol' (previously known as 'Out of Control') by Wietske Vogels about a peculiar female inventor who builds overly complicated contraptions to make her everyday routines into something gracefully awesome.

This release is available as a pay-what-you-want download, but also as an exceptional limited edition. Here it comes... a wooden usb-stick, encased in a bar of soap, home-made by Weerthof! No more vinyl or CD's clogging up your house if you don't want to! Only 50 numbered copies of these are made, straight from the Weerthof cooking laboratory.

(Some reactions to the smell of the Out of Control soap: "This smell reminds me of the boat of my grand-parents", "It smells a bit electrical", "Somewhere between an scullery and a workshop", "Like drinking mint tea on Texel".)

Weerthof is a musician, artist and producer of soundtracks and catchy pop songs hailing from Den Bosch. This is his fifth release, and his first instrumental one in almost 10 years. He seems to have returned a bit to his roots of fusing classical music with IDM, modifying trivial sounds and building objects to create those specific sound combinations. Yet bringing along the exploration of pop and early music from his 2012 album 'Hoi', resulting in a light, somewhat eclectic yet distinctly Weerthovian flavour.

Pantoffle Skiffle by Weerthof is licensed under a Attribution-Noncommercial-Share Alike 3.0 Netherlands License.