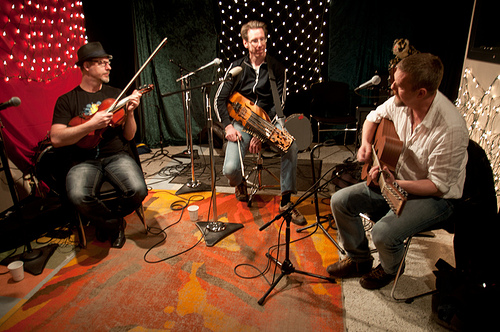 Olov Johansson and Mikael Marin started playing together as teenagers around 1980. During the early 1980's they would regularly visit Curt and Ivar Tallroth and Eric Sahlström, older musicians who lived nearby in the Uppland region, where they would play and learn traditional music from them. In this way they became a link in the living tradition that Swedish folk music has enjoyed through the centuries.

In 1989, at a music gathering in Røros, Norway, Olov met Roger Tallroth and asked if he would like to try to jam on nyckelharpa and guitar for a bit. Roger declined, intent at that moment on taking a shower. Fortunately, the shower was occupied, so Roger returned with his guitar, and they played for the rest of the day and far into the night. Among the witnesses to this fateful jam session was Olle Paulsson, who thought it was the best music he had ever heard, and made a promise to start a record label if they were willing to be recorded for a CD (and thus Drone Music was born).

The following summer Olov became World Champion of both the modern chromatic and older historical nyckelharpas at the first-ever Nyckelharpa World Championships at Österbybruk, Sweden. The added momentum for the first CD recording, which was entitled "Olov Johansson: Väsen." Väsen is a Swedish word with many meanings: spirit, noise, a living being, essence among the most prominent. It was originally meant to just be an album title, but soon people were calling to book the band "Väsen" and the name stuck.

Initially some traditionalists (or something else, it wasn't many at all) in the Swedish folkmusic community showed some resistance to Väsen. While Olov and Mikael were playing fairly straightforward folkmusic duets, Roger's guitar definitely provided a different twist on Swedish traditional music. Yet it's exactly the guitar chordings and rhythms that also attracted an entirely new audience, and the band's popularity gradually grew, along with their international reputation.

In 1994, with two more studio albums under their belt ("Vilda Väsen" on Drone and "Essence" on the French Auvidis/Ethnic label), Väsen were asked to participate on a project of Swedish rock musician Mats Wester called "Nordman," which featured rock music and lyrics but with arrangements and playing by Väsen. The first Nordman CD was a huge hit in Sweden, and the band embarks on two tours and records a second Nordman CD, playing in front of audiences of up to 25,000 people. On the first Nordman tour they meet drummer André Ferrari and eventually experiment with a drums-and-bass version of Väsen. Ultimately, they settle on André playing hand percussion, and the band officially becomes a quartet in 1996.

In 1997 the quartet goes into the studio and records "Varldens Väsen" ("Whirled" in North America). Tours of Norway, Denmark, Finland, Italy, France, the United States and Canada follow, as does a Swedish Grammy and two appearances on the national radio program "A Prairie Home Companion" in the U.S. In 1999 the band releases their sixth CD, "Gront."

Meanwhile the members of the band were getting older, having babies and facing the challenges of being a musician in the modern age. A widespread U.S. tour in September 2001 had to be scrapped after 9/11. Although the tour was rescheduled for 2002, André's reluctance to tour and economics forced the band to decide to come over as the original trio. The success and pleasure of playing a new set of trio material culminated in new recordings."