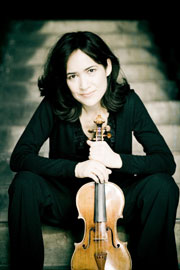 Munich-born violinist Viviane Hagner has won exceptional praise for her highly intelligent musicality and passionate artistry. Since making her international debut at the age of 12, Viviane Hagner has acquired a depth and maturity in her playing that is reflected in her serene stage presence. She has appeared with the world's great orchestras including the Berlin Philharmonic, the Staatskapelle Berlin, the Czech Philharmonic, the Bavarian State Orchestra and the Chicago Symphony Orchestra, in partnership with conductors such as Abbado, Ashkenazy, Barenboim and Eschenbach. Recent concert highlights include performances of the Brahms Double Concerto with Yo-Yo Ma and Canada's National Arts Centre Orchestra, and the Mozart Sinfonia Concertante with Pinchas Zukerman and the Pittsburgh Symphony Orchestra, as well as debuts with the New York Philharmonic under Lorin Maazel and the Boston Symphony under Charles Dutoit. An ardent chamber musician, she has performed at renowned international festivals including Schleswig-Holstein, Salzburg Easter Festival, Marlboro and Ravinia. She was invited by the Konzerthaus Berlin to be their Artist in Residence in 2007/8. Hagner is the recipient of a 2004 Borletti-Buitoni Trust Award.