You came this way: Home > United States Marine Band > Holiday Music Selections > Away in a Manger


Away in a Manger by United States Marine Band 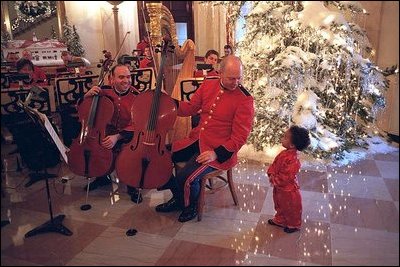 "We Wish You a Merry Christmas" - A secular sixteenth-century English carol from the West Country of England Performed by The U.S. Marine Corps Band, "The President's Own,"

"Auld Lang Syne" written in 1788 by Scottish poet Robert Burns it is set to the tune of a traditional folk song. It is most often heard to celebrate the start of the new year at midnight on New Year's Day. Performed by The U.S. Marine Corps Band

"Away in a Manger" is a religious Christmas carol first published in an 1885 Lutheran Sunday School book by James R. Murray (March 7, 1841 - March 10, 1905), the author of the first two stanzas is unknown. The tune commonly used in the United States was written by James R. Murray and first published in 1887. It is certain that stanza three was added in 1904 by Dr. John McFarland of New York City.

This file is also in the public domain in countries that figure copyright from the date of death of the artist (post mortem auctoris), and that most commonly runs for a period of 50 to 70 years from that date.

thank you to Sookietex for originally posting these files to the Internet Archive!

» VIEW ALL“Away in a Manger” Fans

Away in a Manger by United States Marine Band is licensed under a Public Domain Mark 1.0 License.