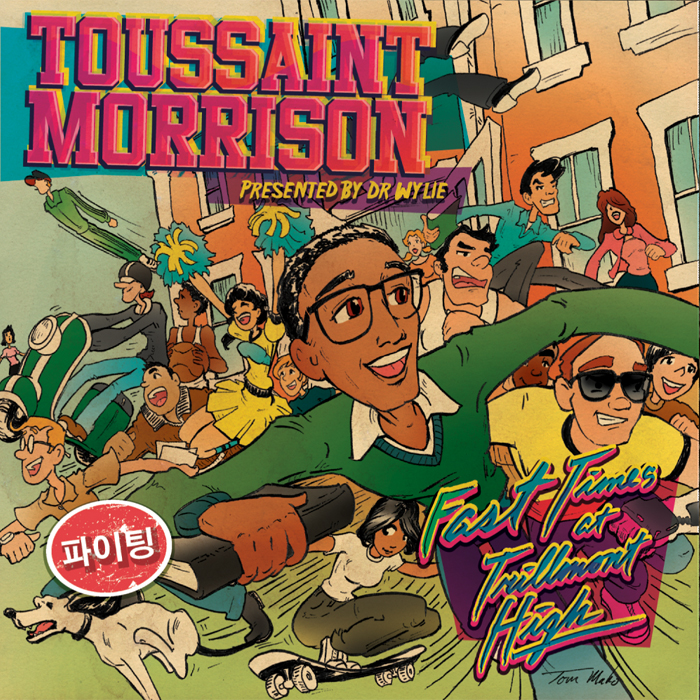 Overdosed on New Avengers, neon, and reports of police corruption, Toussaint Morrison’s flickering psychi has everyone questioning what name he’s answering to nowadays. It all caught up with him entering the Fall of 2012, when Morrison was hired to teach hip-hop and theatre to students at Roosevelt High School, a school on the precipice of being shut down due to racial disparity in Minneapolis. To boost attendance, the principal requested he enter each English classroom and give a clinic on the advent of hip-hop and slam poetry. Here, the situation gets almost interesting enough to ornament upon one sheet. Toussaint Morrison proceeded into each English class to rap and perform spoken word touching on Minneapolis holding the country’s #1 ranked racial disparity in education, death before graduation, and adversity of stratification in the city. The result turned out the largest attendance to Morrison’s after-school hip-hop program that day, a re-invented vigor to make a go for the 2013 national poetry slam, and a pink slip from the Roosevelt High School principal the next morning. The poem performed in Roosevelt that day had incited a riot and surfaced enough underlying tension to squeeze the air out of a building… including Toussaint. Disheveled, halfway through the mixtape before you and left to seek employment at the nearest Starbucks, Toussaint Morrison & Dr. Wylie steered the 80’s-pop-infused joyride into a socio-political themed high school beset in the Midwest. Wrought with Morrison’s experience working in Special Ed. as a paraprofessional and Wylie’s unhealthy, newfound addiction to what he calls “All Synth Everything”, the degenerative duo bring you Fast Times At Trillmont High. The sixteen tracks of Fast Times comes in on the coat tails of their previous mixtape accruing 100,000+ downloads & a #1 ranking in RapReviews.com’s Hip-Hop Albums of 2012. Stay tuned for more pink slips, bonus tracks, and hints of a debut album before 2014.