Life In Schaarbeek by Titmachine 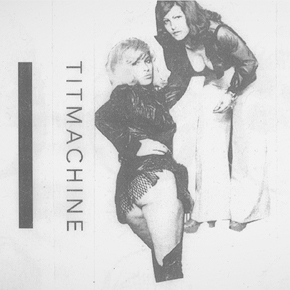 Four girls, No nonsense, no wave

"Four sets of female hands creating a rather bodacious racket." - The Wire

"They are billing themselves like some kind of novelty, having met in prison and this is the only job they can get?... they are a joke." - 7 Inches blogspot

Release notes: Original cassette cover artwork can be downloaded here, dub your cassette and print it off. All tracks digitized from a cassette by Gale Roger Punter.

Note: This recording came courtesy of Meeuw Muzak. A release was planned on Diskono offshoot 'Penthouse Hotplate' in 2001 curated by Meeuw Muzak label boss Mr. Meeuw. Music was from Af Ursin with images of boring postcards on the CD. The artwork was completed and sleeves printed at Knust in Nijmegen, however the CD was never pressed. Maybe this will appear in the future.

Life In Schaarbeek by Titmachine is licensed under a Attribution-Noncommercial-Share Alike 3.0 United States License.
So far 0 comments about this album. Add your 10 cents!