Throcke is the creation of Christopher Mollineaux Carson. It is a solo studio project involving electronic and organic elements - distorted organs, cascading drums and soothing guitar melodies as well as quirky clicks and blurps. Occasionally there are layers of vocals, or perhaps a windy wash of rain.

Throcke self-produced his debut EP Advance Longing in 2005, followed by a string of single tracks. He then slowed down the songwriting for a few years while playing drums for the band UMAMI. 2009 marks his return, with the full-length album Sometimes Not Unpointful.

At the moment, all of Throcke's albums are available for free at http://www.throcke.com

Throcke is Christopher Carson of Brooklyn, New York. His music features layers of his many instruments, clever electronic sounds, and field recordings of airplanes, water, elevators and birds. Working away in his studio, Throcke creates music that makes the world a better place.

Wondering about origin of the name of Throcke? Here's the scoop!

"Throcke does not mean 'The Rock.' It's actually a nickname that dates back to 7th grade when my weird friends and I started a band called Jimmy and the Rotting Potatoes. No one was named Jimmy (well, there was an 'essence' we called Jimmy, who was responsible for lights flickering and doors suddenly opening). Anyway, we tried to come up with some ridiculous names for ourselves, like S.L.U.G., Turnip, Big Andy, RigorMortis, and Throckmorton S. Peagood XVII. What started as a joke somehow stuck and evolved into Throcke."

Christopher has been a drummer and songwriter for many bands, including Planet Nine, Hurka, Grasshopper Highway, Exit Ocean and UMAMI. He has also written scores for several short films. In fact, during the days, he edits film and video, mostly for television commercials.

His Throcke project gets most of his creative time these days -- to the good fortune of we the listeners! Enjoy his new Sometimes Not Unpointful CD, and drop some cash in his tipjar, won't you? 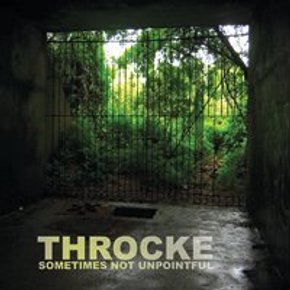