You came this way: Home > The Subhuman > Knowing is half the battl… > I'm a God


I'm a God by The Subhuman 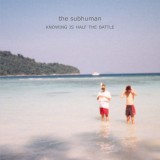 The Subhuman is the alter ego of Dutch singer/songwriter Stefan Breuer (1987). His music is all about songs. Stefan's been writing them since age 10 and has released them on various privately produced CDs.
In 2002 he formed his own band, The Subhuman & The Holy Ghosts, to perform his songs with him, but Knowing is half the battle is 100% pure Stefan.

WM Recordings is proud to present this new Dutch talent to the world!

I'm a God by The Subhuman is licensed under a Attribution-NonCommercial-ShareAlike 3.0 International License.