Glitch Chicks with Glow Sticks by The Polish Ambassador 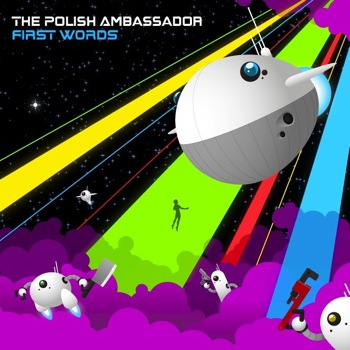 Poland’s Ambassador to the Universe is at it again with his newest release, First Words, a very elaborate and satisfying 23-track double album. Heavily layered tracks, funky synthesizer tunes; sped up or slowed down – all amass into a mutated, promiscuous, space age romp with a room full of sexy robot girls and brawny spaced out adventurers.

The Polish Ambassador is a beat machine from the future; he drops his own unique blend of electro-funked, glitch-tweaked, wobble-freaked breakbeats that will have both dance floors and headphones undergoing heavy usage. “No Genre Left Behind,” Sugalski jokes as he blends elements of funk, glitch, idm, hip hop, 80s music, jungle, and dub into a beat soup that will instigate healthy doses of booty shaking and fist pumping.

This double album can be likened to a computer rocking out to hybrid hip hop beats created with panache and style. Skinny Jeans is a prime example, chosen because of the clear thought process behind the absurdity, the maneuverings of Sugalski’s mind evident and the crafting is a joy to listen to. Salt N Pepa never had to worry about bringing the heat to the party but Sugalski seduces them in return on Glitch Chicks with Glow Sticks, beeps, glitches and ambient elements that titillate but also keeps the interest to garner the intended response. Track 17 is by another man in a suit, Daly City’s own Mochipet and The Polish Ambassador remixes VNex wonderfully. Originally a silly and lighthearted summer banger, with Sugalski at the helm it transforms into a slowed down, tingly and racy track with an added video game feel. The Polish Ambassadors’ First Words is for everyone; nerds, savage children, people who don’t know better and aficionados of well arranged compositions.

Glitch Chicks with Glow Sticks by The Polish Ambassador is licensed under a Attribution-Noncommercial-Share Alike 3.0 United States License.