You came this way: Home > Serious Business Records > The Paparazzi > Rococo > Up, Up and Away (Major Scale)


Up, Up and Away (Major Scale) by The Paparazzi 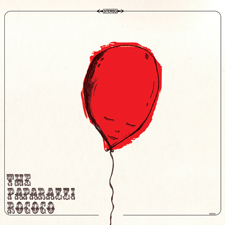 The Paparazzi is the musical pseudonym of songwriter and rock auteur Erik Paparazzi, who has spent the better part of the past decade as a sideman with Cat Power's Dirty Delta Blues. His new record Rococo, recorded back in 2004, has finally seen in March 2010 thanks to Serious Business. Expect a lush and dreamy ride that harnesses the best moves of several purveyors of lost classics and lost weekends: Brian Wilson, Harry Nilsson, and Todd Rundgren.

Back in 2004 when The Paparazzi was performing regularly as a 7 piece band, they recorded the tracks for what was to become Rococo. But something was missing in the final results, and Erik shelved the record until 2007. On the road with Cat Power, he began remixing it on his laptop and wound up deconstructing many of the original performances and arrangements, sometimes drastically reinventing the songs. In so doing he gave new life to the project, and brought us a sonically stunning and wholly immersive record.

This is one to play through. From the first note to the last, Rococo thrusts listeners into a quasi dream state, conjuring rich images and soundscapes while reveling in pop thrills with enough happy accidents to subvert any hint of predictability.

Up, Up and Away (Major Scale) by The Paparazzi is licensed under a Attribution-Noncommercial-No Derivative Works 3.0 United States License.