Big Man by The Lowdown 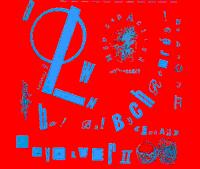 Something strange is going on in Santa Cruz, California, and The Lowdown operate at its' very apex. Revolver II emerges as The Lowdown's confounding, chemically imbalanced debut full-length recording. Rest assured, the supersonic splatter factor runs sky high all over this platter. But oh, what a beautiful noise it is!

Revolver II regurgitates raw sound through a complete deconstruction of the musical process. By utilizing whatever instrument that happens to be available, no matter how rudimentary, a necessary window into The Lowdown's decidedly tongue-in-cheek creative genius is opened wide. The band is propelled by the relatively standard dueling guitars-and-drums punk rock blueprint; but The Lowdown's equipment happens to be tainted, handicapped, pummeled, weathered. Pushed to the limit, a typically rock format now treads in a wholly other realm of primitive sound. The musical mess The Lowdown creates becomes further perverted through a smattering of drum machines, saxophones, casio keyboards, samples, and a feedbacking tuner. Each song stumbles ahead with frayed volume, sewn together by intermittent bursts of noise, studio tweaks, and general tomfoolery. Kindered spirits like Deerhoof or Half Japanese would seemingly gyrate freely with undaunted respect to their unbridled cacophony. Producer wizard Phil Elvrum (Microphones, Old Time Relijun) captures their lo-fi thunder perfectly, pushing the needles deep into the red, catering towards The Lowdown's penchant for blissful experimentalism by using mutated microphones and some demented studio splice 'n' dice. 4-track confusion by drummer Noel further augments the tunes. Live, The Lowdown are in their element. Fortified with spastic energy, the band unleashes a spectacle, an all-out assault on the senses, a sonic collage that can make you dance or make you buckle into a spent heap. Revolver II captures this experience and expands upon it, creating a malignant mass of sonorous goo. Remarkable!

Humor, energy, and honest experimentation are all present at The Lowdown's banquet. Revolver II is a toast for all weird occasions. Recorded and mixed at Dub Narcotic Studios, Olympia, Washington Winter 1999/2000.

Big Man by The Lowdown is licensed under a Attribution-Noncommercial-No Derivative Works 3.0 United States License.