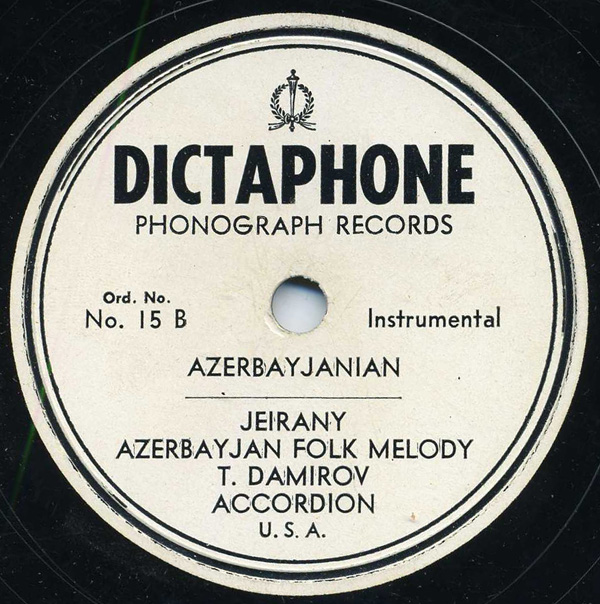 I’m kicking off February with a series of musically intense posts. Get ready.

Today, we move over to Central Asia for a blistering solo by Mr. Damirov, performed, I believe, on the garmon, a Russian button accordion commonly used in Azeri folk music. I find this piece to be absolutely perfect - both frenetic and fluid, deeply traditional yet utterly contemporary.

The “Dictaphone” label - well, that’s a story in itself. In the US in the mid-1940s or so, someone, somewhere (a record shop? a multilingual entrepreneur?), decided to bootleg music from the Near and Central East, presumably for sale to immigrants in the States, probably around New York City. This someone set up a series of more or less uniform-looking record labels with the same typeset, and little to no pertinent information on them, save for the artist and title. Sometimes, the original title was changed or altered. “Perfectaphone” is the label that I’ve seen most often - that was for Turkish music. “Armenophone” is another that crops up, obviously the Armenian imprint. Then there was “Dictaphone” for music of Azerbaijan, Uzbekistan, and other Central Asian countries - and the rarest, “Kurdophone” for music from Kurdish regions (probably recorded in Turkey, too). The latter two labels are about as rare as the original records that they were bootlegged from. This beautiful Dictaphone record was most likely bootlegged from Russia’s CCCP label, which was a real giant in terms of output.

Whomever was running this outfit had a pretty good ear - most everything I’ve heard on all of these labels is really quite good, if not stone beautiful. Yes, Perfectaphones have quite a bit of Turkish popular music from the mid-20th century on there, but also plenty of folk and classically-tinged material. And, surprisingly, as bootlegs they sound pretty nice.

For more Damirov, check the Secret Museum’s Central Asia CD. There are some garmon players on YouTube, as well - try here.