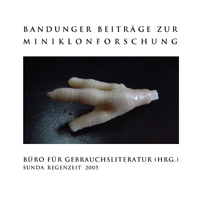 With the release no. 11 we open a small door and cross the line from electronic to eletro-acoustic music. This contributions (Beiträge) demand a certain kind of aware listening. Small pieces need to be discovered and put into relation to each other. What is related, what has just been placed adjacent?

Despite its quite academic approach one can easily hear, Svann E. Langguth must have ha a certain kind of fun playing around with the given acoustic material.
The material was taken from a recording in the year 2001 with the group Miniklon from Berlin (Dirk Specht, Patrick Laschet und Michael Nick). The group itself never worked with this recordings or has, until now, published anything from it. In 2005, during his stay in Bandung, Indonesia, Svann E. Langguth worked with this recordings.

The outcome are some sonic metamorphosises from Miniklon, preparations from an acoustic surgery, or (one might say) an autopsy, as Miniklon have broken up recently. There are no structural parallels with the pieces from Miniklon, only the sonic aesthetic is inspired by the sounds of Miniklon.

The “unsolicited contributions” (unverlangt eingesandt) are the first four pieces to the play “Black Box” (2005) from Hikmat Gumelar, that deals with the genozide 1965 in Indonesia.

6. by Svann E. Langguth is licensed under a Creative Commons Attribution-NonCommercial-NoDerivatives 4.0 License.