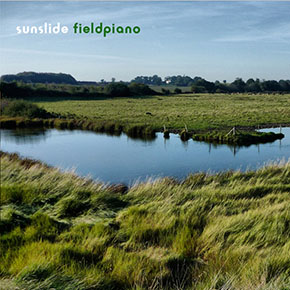 We didn’t have space in London for the piano so it was kept in a barn in Cambridge for five years. I had it moved to our new home in Suffolk. At the start of the year.

We live just opposite the docks of Felixstowe. It’s the second largest container ship facility in Europe after Rotterdam. There’s quite a lot of noise and yet there is a huge bird population just opposite in the marshes and on the River Orwell.

I started harvesting the atmosphere along with some simple piano improvisations. I’d been listening to Chopin, Schumann, Bill Evans, Svalastog, Arve Henriksen, Dronæment and Phonophani. I liked the decay that Eno had experimented with on /Discreet Music/. All these contours contributed to the soundscape that is ‘field piano’.

Squelching of boots walking the flooded fields, the rattle of a gate and then the piano. These nocturnes bring an impression of the landscape in keeping with Satie and Poulenc; where the music is found between the silence and the hammer on the string.

If Cartier Bresson was a musician this might well be his thing.

Field Piano 3 by Sunslide is licensed under a Attribution-NonCommercial-NoDerivatives (aka Music Sharing) 3.0 International License.