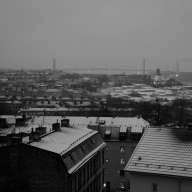 The song released for Bad Panda has been a part of the live set for a few years and this recording features only a few members improvising an arrangement for a song that was then only a day old or so. Though attempts have been made to re-record it, it has a certain simplicity in this form that is hard to reproduce. And it really sounds great to our ears.

Read more about Strayfolk and this record at Bad Panda Records.

Bad Panda #22 by Strayfolk is licensed under a Attribution-NonCommercial-ShareAlike 3.0 International License.
So far 1 comments about this album. Add your 10 cents!