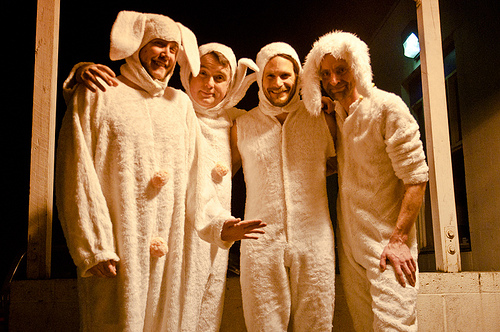 The band is still Remington Steel (drums), El Tigre (guitar), Brad Of (bass/vocals) and Michael Deth (guitar/vocals). “Yep, we like to think of ourselves as the ‘Classic Lineup,’” they say. “We also like to think of ourselves as ‘Handsome,’ ‘Talented,’ and ‘Considerably Younger Than We Actually Are.’” But on their second LP listeners can find musical magic behind the never-revealed-before-they-hit-the-stage matching outfits they’re known for wearing out (meant both ways) when playing live (for example, storming it at the 2010 Seattle Capitol Hill Block Party, and recently opening for Les Savy Fav."