You came this way: Home > You Are Not Stealing Records > Stealing Orchestra > Deliverance > Sem Tempo Para Tudo (With Ana Deus) 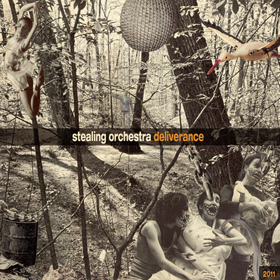 2011 Press Release
After seven years, Stealing Orchestra gain new life and announce their return with their third feature-length album, DELIVERANCE. The new album contains nine brand new tracks and celebrates the 10th anniversary of the band's netlabel You Are Not Stealing Records.
Stealing Orchestra are joined on the new album by Rodrigo Leão (Madredeus) and Ana Deus (Três Tristes Tigres).
The last release of this Portuguese band from Porto was the EP BU in 2004. Since then, the musicians have dedicated themselves to various side projects, including X-Wife, Genocide, Motornoise, GG Allin's Dick, Tres Tristes Tigres, Mécanosphère, Dr. Phibes & The Ten Plagues of Egypt, FRICS, and Two White Monsters Around the Table. Members have even collaborated with musicians like John Zorn, Damo Suzuki (Can), Steve Mackay (Stooges), Massimo Pupillo (Zu), and Pamelia Kurstin, among others.
This "liberation" is the culmination point of several years of distilling ideas, compositions, recordings, and sound research. Unlike previous albums, where manipulation and sound collage assumed a key role, DELIVERANCE celebrates a new attitude of the band, promoting a creative process involving several elements where it is impossible to distinguish between what are samples and what are the real instruments.
The result is thus a more organic and fluid composition, which must be heard as a whole: the drama in "Evitando o Cinismo (Avoiding Cynicism)," the loss in "Enquanto há Memória (While There is Living Memory)," the harsh beauty of the Tras-os-Montes province in "Um Reino Maravilhoso (A Wonderful Kingdom)," the popular violence in "The Glorious Moment of Popular Catharsis & Revenge," and the hope in "Earth Provides Enough to Satisfy Every Man's Need." In the last song, "Getting Him Out Of Creation," we listen to an excerpt of an interview with the philosopher Colin McGinn, on THE ATHEISM TAPES (BBC, 2004). Then back to the beginning of everything: explosions, the thunder, the violent birth of the Earth, and the first sounds of water and life, ending in Man, the Machine, and Chaos. Stealing Orchestra suggest us to forget God and see the creation of a world that was born by itself and not by Him.
With 13 years of existence, Stealing Orchestra edited their first demo in 1998, POSTCARD PEOPLE, which earned them the attention of critics and six awards at that year's edition of the defunct Prémios Maquete (Demo Awards). Two years later, the group launched their debut album STEREOGAMY (NorteSul / EMI-VC) which expressed the group's fascination with cinema, collages, sound manipulation, computer game soundtracks, and obsolete machinery capable of producing the most unlikely sounds.
In 2001, the album É PORTUGUÊS? NÃO GOSTO! began a new phase in the band's career. Released by the newly formed netlabel YANSR (the first Portuguese netlabel and one of world's first), this EP challenged traditional means of publishing and played with the prejudices about "what is ours" (from our country Portugal). The title speaks for itself, IS IT PORTUGUESE? I DON'T LIKE IT.
The last full-length release before hibernation, THE INCREDIBLE SHRINKING BAND (Zounds / Sabotage), took their universe further and continued to celebrate music as a weapon. At this time the group had reached the status of a cult band in Portugal. A year later, they released THE HAUNTED AND ALMOST LOST SONGS 97-98 - a collection of previously unreleased lost songs recorded during 1997 and 1998 - and BU! - an exorcism in the format of an EP of their paranoias, fears, anxieties, and excitements.