City of the Living Dead [hidden track] by Steadman 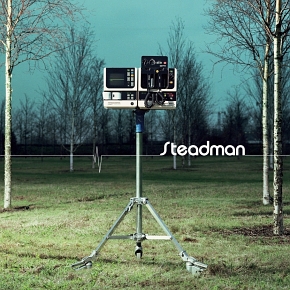 Steadman were a British indie rock band, originally named The Dharmas, but they changed the name after they cancelled their contract with the label Arista, and signed with lead singer Simon Steadman's own label, Freeloader Recordings.

On hearing this album and catching Steadman live, Sir Paul McCartney raved about the band, writing the following:

The band STEADMAN have the SONGS, THE MUSICIANSHIP, THE ENERGY and the ENTHUSIASM to BLOW THE TOP OFF any CLUB or ARENA, and if given a listen, have that RARE quality --

the ABILITY TO DELIVER!

REVIVE was originally released by Elektra, but rights were returned to the band. After big label hassles, the group was able to dissolve contracts and release their work independently on vocalist and songwriter Simon Steadman's label, Freeloader Recordings.

Simon Steadman writes, "We made this album with stellar production team Alain Johannes and Natasha Shneider from the band Eleven (currently playing in Queens of the Stone Age). I recommend you check out their music at www.elevenworld.com."

He also adds some trivia for the songs on this album.

City of the Living Dead [hidden track] by Steadman is licensed under a Attribution-NonCommercial-NoDerivatives (aka Music Sharing) 3.0 International License.