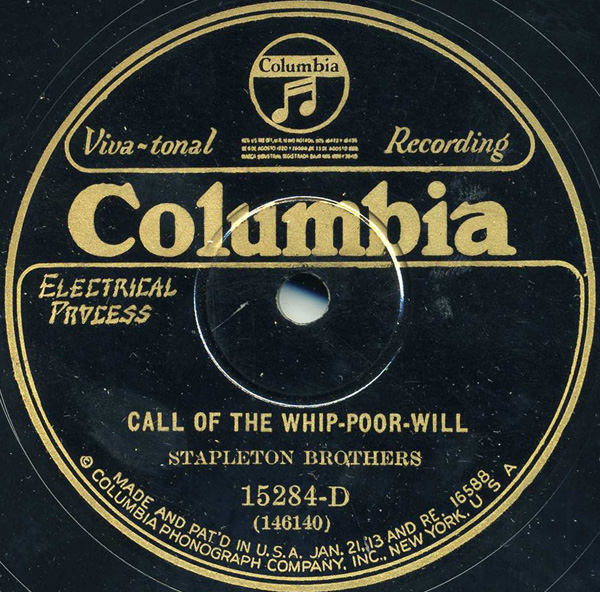 I received an e-mail request asking to post some early American country music. Since early country music was what originally led me to collecting traditional music from outside the U.S., I thought: great idea! However, like the rest of the material on Excavated Shellac, I wanted to stick to music that had not already been collected on CD. This was a difficult task. Sure, all my 78s by essential artists like Uncle Dave Macon and the Carter Family were on CD. But, so were slightly more obscure and harder-to-find country records. The three records by the Binkley Brothers Dixie Clodhoppers? On CD. “Texas Quickstep” by The Red Headed fiddlers? On CD. Cousin Emmy? On CD.

Then I started combing through the records that I simply had an attachment to…”Methodist Pie” by Bradley Kincaid? On CD, too. “Gonna Swing on the Golden Gate” by Fiddlin’ John Carson? On CD. On and on…

Then I remembered this record - the quaint yet lovely “Call of the Whip-Poor-Will” by the Stapleton brothers, recorded by Mitchell and Mason Stapleton in Atlanta, Georgia on April 19, 1928. Not on CD, at least as far as I can tell. It’s always been a favorite of mine for those inexplicable reasons one has for liking a particular song.