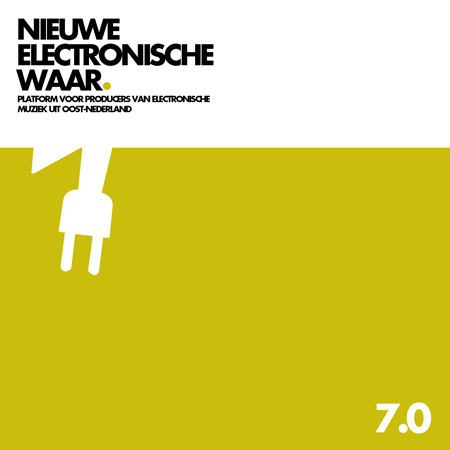 Electronic music is one of the major export products of the Netherlands. It seems we have an almost endless supply of talent in our country, more than anywhere else. Numerous young producers master all kinds of production skills within the confinement of their own bedrooms. A lot of these tracks never reach an audience beyond the producer’s headphones unfortunately. Album NEW 7.0 collects twelve of these incredible tracks. Alienating trip hop, heavy techno, old school house, future garage: talented producers from East Netherlands seem to pop up in all conceivable genre.

N.E.W. puts new producers from East Netherlands on the map. Selected for NEW 7.0 are Sam a La Bamalot, Badencourtrecords, Youri, Lopende Paddo, Addicted White Guy, Sonurber, The House Arts, Near Earth Object , Grimm Limbo, Le VingtQuatre, Knarsetand and Radion. This twelve men strong wave of producers will be promoted by NEW all year long in many different ways. First of all there's the release of the compilation album NEW 7.0, which will be available on a free CD at release parties in both Nijmegen and Deventer. Free digital copies are also available through online label esc.rec right here on this page and at the site www.nieuweelectronischewaar.nl.

Next to releasing their work and offer them a stage to perform, N.E.W. also offers these affiliated producers a chance to develop. At the site nieuweelectronischewaar.nl producers in East Netherlands are able to create a profile, share their latest productions with other members and offer each other feedback. All new tracks are considered for the next compilation release, NEW 8.0. Regular workshops and master classes are organized for active members. In December there was a sold out conference in Het Burgerweeshuis (Deventer) at which 80 N.E.W. producers had a chance to further develop their production skills under the guidance of (a.o.) Nobody Beats the Drum, Kubus and Pitto.

NEW is a platform for producers and electronic music from East Netherlands with the specific goal to discover and develop new talent in this field. There are many talented producers in East Netherlands that otherwise would not be heard. NEW is devoted to the development of these producers, both in the studio and on stage, by offering showcase performances, organizing workshops and releasing a new compilation every year. NEW is a collaboration between productiehuis ON, Het Burgerweeshuis and Doornroosje and has been made possible with the help of the municipalities of Nijmegen and Deventer.

Wishes by SonurBer is licensed under a Attribution-Noncommercial-Share Alike 3.0 Netherlands License.