You came this way: Home > Curator: WFMU > So Percussion 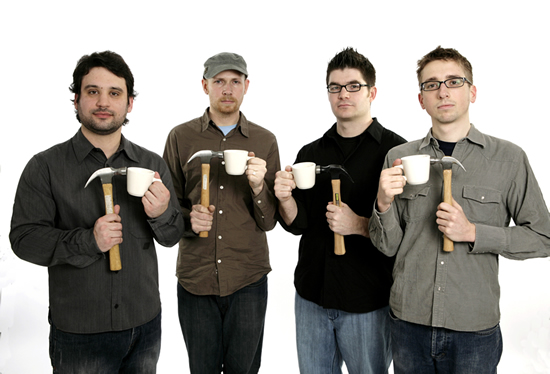 Since coming together at the Yale School of Music, So Percussion has been creating music that is at turns raucous and touching, barbarous and heartfelt. Realizing that percussion instruments can communicate all the extremes of emotion and musical possibility, it has not been an easy music to define.  Called “astonishing and entrancing” by Billboard Magazine, “brilliant” by the New York Times, the Brooklyn based quartet’s innovative work has quickly helped them forge a unique and diverse career.

So Percussion has performed this music all over the United States, with concerts at the Lincoln Center Festival, Carnegie Hall, Stanford Lively Arts, the Cleveland Museum of Art, and many others.  In addition, recent tours to Russia, Australia, Italy, Spain, Germany, and the Ukraine have brought them international acclaim.  (official bio 2009)