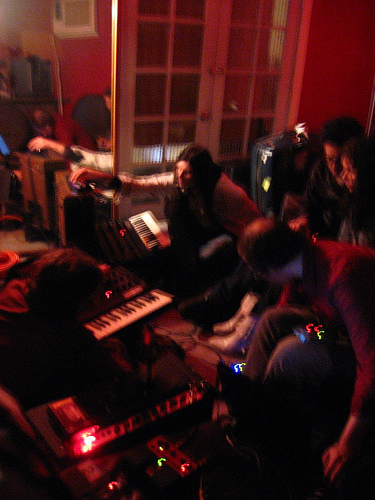 This was the noise jam of all noise jams. Legendary sweet sound freaks Smegma were joined by John Weise, Demons, Pod Blots and other helping hands to stir up a batch of supreme static and super streams of sound conciousness. Now that you're excited let's back up momentarily so you can dig the full scope of these forward moving sounds. Smegma bubbled up in Pasasena, California in 1973 and formed part of the still ultimately active and influential L.A.F.M.S. (Los Angeles Free Music Society). The members, an often morphing mass of experimental music masters, have individually and collective been responsible for some of the most mind-bending music made in this universe. They float on undercurrents and arise often to tune our ears into the twisted. Thanks to Ron and his Poobah posse for helping make this possible. For more tender moments with Smegma mayhem visit > myspace.com/smegmatheoriginal