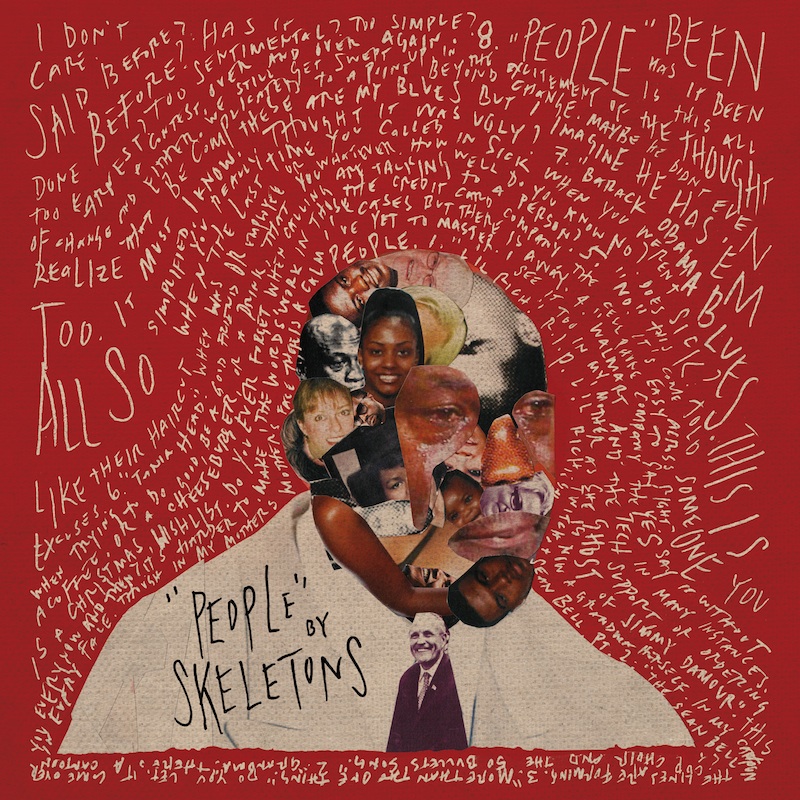 » LOG IN TO TAG
CURATOR:
Released:April 26th, 2011
GENRES:
Length:00:07:27
Label:Shinkoyo
One of the most fascinating bands from the hugely creative Brooklyn/NYC scene of recent times, Skeletons create intense, original and revelatory music, working a globe-spanning realm of inspirations into a singular and colourful vision of guitar-based songcraft. Led by Matt Mehlan and his long-term collaborators Jason McMahon and Jonathan Leland, Skeletons have spent the last few years touring their potent live show all around, releasing a string of bold, beautifully recorded albums in the process.

“People”, their new album, co-mixed by Rusty Santos (also known for his work with Owen Pallett and Animal Collective/Panda Bear)is the first released in exciting union between Shinkoyo and Crammed Discs, with a limited vinyl edition via Sockets Records. It brilliantly boils down all the band’s thrilling sonic excursions into a collection of concise, fluid and emotive songs: rich, subtly dramatic musical atmospheres envelope Matt Mehlan’s compelling lyrical tales, inhabited by unlikely real-life characters (Jimmy Damour, Tania Head, Lil’ Rich and others) whose stories are told from a viewpoint which is both human and social/political.

Even considering the number of talented, musically globetrotting guitar bands to have emerged from the US thus far this century, Skeletons have always stood out as ‘one of the few contemporary bands who can legitimately be called original’ (in the words of US magazine XLR8R). Previous albums such as “Money” and “Lucas” (on Tomlaband Ghostly respectively) saw Skeletons dabble in everything from Prince-indebted pop to free jazz freak-outs to percussion heavy afro-funk, angular art-rock, orchestral folk and "quiet storm" R&B. While many tracks of their earlier careered through styles and sections in a manner both playful and uncompromising (not to mention thrilling), the songs that populate “People” are pointed and meticulously arranged, and resist the urge to nod overtly to anything other than themselves.

It’s an approachability matched in Mehlan’s thoughtful lyrical tales of a species that’s brittle, at times broken, but ultimately in awe at the sheer possibilities that lie, for better or worse, at its fingertips. From a viewpoint both human and social/political, Mehlan tells the stories of Jimmy Damour, the temp worker who was trampled at a Walmart "Black Friday" sale, Tania Head, the head of the World Trade Center Survivors Network who invented a story of 9/11 survival, plus the sad passings of L'il Rich, a young victim of gang violence down the street from Matt's apartment, and Sean Bell, the unarmed man killed by over 50 bullets from NYC Police Officers the night before his wedding.

The recording of “People” started while the band was touring around Europe and the US. They took to getting their road-tested new ideas to tape wherever possible: a tiny studio beneath a Ukelele shop in London, "East Nile", the West Coast home of Shinkoyo (the label the band co-founded) in Oakland, and back in Brooklyn in the cold basement of a defunct Catholic school. Having stockpiled a catalogue of mixes and alternate versions, they enlisted the help of Rusty Santos of The Present, who has lent his ears to the mixing of Owen Pallet's (Final Fantasy) recent records as well as Animal Collective's "Sung Tongs" and Panda Bear's "Person Pitch". He helped hone People” into what it is: a glorious, heartfelt culmination of all that Skeletons have done to date.

Skeletons will be touring North America, Europe and Japan in the Spring and Summer 2011, including collaborating with Deerhoof, Konono No. 1, Juana Molina, Kasai Allstars, and Wildbirds and Peacedrums on the Congotronics Vs. Rockers Tour in July.

Grandma by Skeletons is licensed under a Attribution-Noncommercial-No Derivative Works 3.0 United States License.