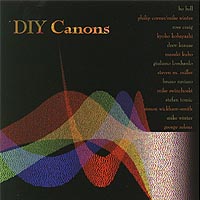 "The pieces on this CD are all based on the ideas in Larry Polansky's four voice canons, a series of pieces he began in 1975. These canons are usually "mensuration canons," which means that the tempi of successive voices is proportional to their start times, so that the voices end together. They also use simple ideas of moving through a list of permutations, and applying the elements of those permutations to various musical parameters. A set of Polansky's canons was produced on Cold Blue Records as four voice canons (CB0011).
Polansky described these ideas in Four Voice Canon #13 ("DIY Canon"), a kind of open-source meta-canon score. He distributed this at talks and on the web as an open invitation to others who wanted to make four voice canons of their own. Composers responded with a wide variety of variations on the basic idea; a selection of these works is presented here." - Simon Wickham-Smith, curator