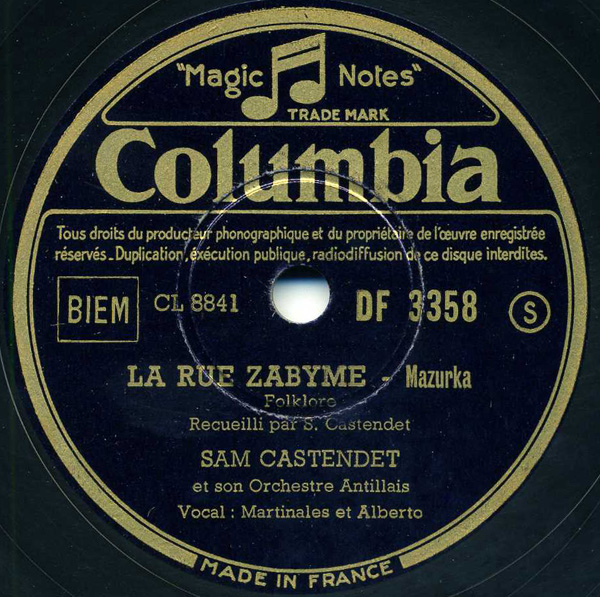 There are numerous types of Martiniquan music, but one form that proved quite popular in early recording, even becoming something of a craze, is known as biguine, an orchestrated popular music vaguely similar to calypso or a rhumba, and where the clarinet and trombone have a strong presence. Typically, the clarinet is played with, for lack of a better word, a weepy sound - which you might find similar to the late-1930s Boateng record I posted a while back…an example of direct, cross-Atlantic influence.

Most, if not all, early Martiniquan bands recorded in Paris, beginning from about 1930, when the great Alexandre Stellio began recording for Odeon. Sam Castandet appeared on the scene not soon after, and had a recording career that lasted at least until the 1950s. This track has the typical orchestration for a biguine tune, but is meant to be danced as a mazurka - it was recorded ca. 1940.

There are a few nice CDs of early music from the “French Antilles.” Au Bal Antillais on Arhoolie, and Music of Martinique on Flyright are two examples. Another that looks like it may be harder to find is Biguine, Valse Et Mazurka Creoles 1929-1940, released on Fremeaux & Associes.