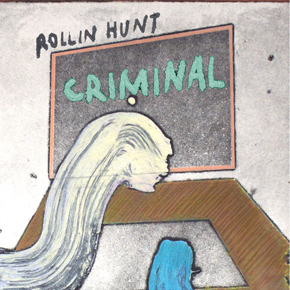 Rollin Hunt doesn't say publicly what planet he's from, but it's safe to say it isn't ours. Disguised as a healthy midwestern boy, Rollin began infiltrating human society at an early age. As a teenager in Chicago he was never seen without a tape recorder or video camera, using the flimsy pretext of "art" to collect data for his extraterrestrial research. By his early 20s, he began recording pseudo-popular music as a way to synthesize and transmit his findings.

A capable anthropologist, Rollin's songs deftly penetrate various human types--the Criminal, the Bum, the Waitress--while his music has the odd quality of being both robotic and soulful. Rollin Hunt may in fact be a cosmic being who has been programmed for earthly love.  There are echoes of other aliens who've come to visit our turntables--Joe Meek, Roky Erickson, Sun Ra--but Rollin's outsider take on humanity has the unique quality of tenderness. Much of his charm comes from his bumbling attempts to approximate our culture--like  Balki Bartokomous of TV's Perfect Strangers, he can be
painfully foreign, employing stilted grammar and forgetting the names of holidays. His pop sense is likewise skewed; Jessica Hopper, writing in the Chicago Tribune, describes his sound as "unearthly shoo-be-doo... as if someone was trying to imitate the Shangri-La's or the Ronnettes but only knew them from a thirdhand description."  It's not surprising, then, that he's caught on among certain warped segments of music-lovers. A bunch of worshipful foreigners have even
put together a tribute album, cryptically titled Him Who Is There, that portrays Rollin as some sort of oddball Messiah. There's a sense that this visitor, this interplanetary innocent, might have something important to teach us about human life.

The two songs on this 7" serve as a raw and startling introduction to Rollin Hunt. Already hailed as "savant-garde," his musical explorations of Life on Earth will continue with a full-length album due later this year on Moniker Records (recorded with whiz-kid producer Donny Schroeder).  As suggested by one of his early home recordings, titled (significantly) Dear People of the World, Hunt's musical messages are meant not only for aficionados but for our entire species........................................

Are we ready to listen?

Criminal by Rollin Hunt is licensed under a Attribution-NonCommercial-NoDerivatives (aka Music Sharing) 3.0 International License.