Crossing the Street by Rocketship Park 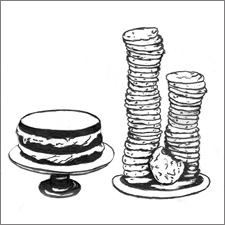 returns for a second album. The physical manifestation of this record is a 7" single + CD + cookie set.
The full album on CD is packaged with a 7" single of "Fast Friends" b/w "Catherine" and "Pistachio." 300 pieces. The first 100 records will be pressed on black and white split vinyl like a black and white cookie. Hand numbered. Letter-pressed. Art by Kara Smith. Each order comes with a delicious homemade cookie or sweet treat from the Kaufman-Nero kitchen.

If you're looking for something to tell you the band in question tours extensively and has enjoyed the good favor of the blogosphere, has pioneered its own micro-genre or commands legions of street-teaming fans, forget it. Rocketship Park is simply a hidden musical diamond in the infinite clutter of the twenty first century. Unless you've been directly involved in the growth of this project, there is only one point of entry for you.

Listen to the record!

Once you've done this, if you need more information, read further. Rocketship Park is masterminded by a multi-instrumentalist, song-man, producer, vocalist, and auteur by the name of Josh Kaufman. Josh spent many years writing and recording hours and hours of fantastic songs absolutely beloved and worshiped by his friends but never officially compiled or released, much less promoted. It wasn't until 2006 that he mobilized Rocketship Park, an entity designed as a band but ultimately evolving as his solo vehicle. In 2007, with the help of some incredibly talented friends, Josh and his band made Off and Away, the first Rocketship Park record. NPR described how Kaufman "fleshed out smooth, folky songs about life and loss, family and friendship, while harnessing a simple, seemingly effortless beauty." These songs scored the lives of a loyal and devoted few.

In the intervening years since Off and Away's release Kaufman has become a busy side-man, a working musician and producer whose unique talents have brought him to the studio and/or the stage with the likes of Dawn Landes, Caithlin de Marrais (of Rainer Maria), the National, Josh Ritter, Yellowbirds, Balthrop Alabama, Benji Cossa, Higgins and too many more to list here. These artists play with Josh because nobody can do what he does. He's not just a guitar player, a keyboardist, a bassist, a drummer, a producer, an arranger, a singer, a composer, a song-man, a lyricist, or the greatest guy ever, although he is all of these things exquisitely and without peer; Josh is a force of Josh. Nowhere is this force better embodied than on Cakes and Cookies.

Knowing Kaufman's brilliance explains his popularity as a collaborator with other artists. That busy touring and recording schedule kept him from finishing the second Rocketship Park record for nearly three years but allowed him the time to buff it into an utterly seamless work. Cakes and Cookies resulted from several years of sporadic sessions with Serious Business' Travis Harrison, engineer Halsey Quemere, and an expanding cast of collaborators including Landes and the National's Bryan Devendorf. Kaufman's pop songs speak multitudes in verse and chorus. To deem his compositions "catchy" would be accurate but would undersell their eloquence and power. He makes beautiful, utterly delightful pop music no one else could ever make.

Listen to the record!

Crossing the Street by Rocketship Park is licensed under a Attribution-Noncommercial-No Derivative Works 3.0 United States License.