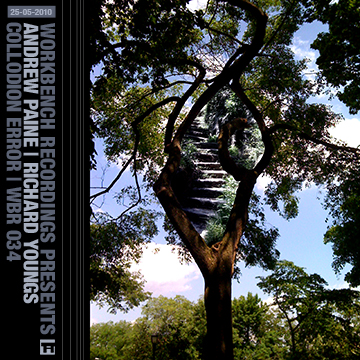 Just how close to the edge is it possible to get? Zeno's paradox would suggest that no matter how hard one tries, it can never be reached. Achilles spends eternity trying to catch a tortoise but only ever getting part of the way, the distance between the hero and the reptile shattered into an infinitude of tiny spaces to be traversed first one then another, with no ending in sight. Just the same, there's a whole universe to be travelled before we get truly close to the edge.

Glasgow-based musicians Richard Youngs and Andrew Paine keep on trying to reach that edge - separately and together. Youngs is a humble bastion of UK experimental music: as a solo artist of dizzying diversity, as an erstwhile member of underground free-music originals The A Band and, more lately, as bassist in Jandek's live trio with drummer Alex Nielsen. Paine is a quietly determined generator of avant-sounds, documented and distributed through his CD-R label Sonic Oyster. The two have recorded together since the end of the 20th century, sometimes under their own names, and sometimes as Ilk, a project that takes the baroque narrative stylings of classic British Prog as a starting point from which to explore psychedelic Noise, drone and Improv.

With Collodion Error, it's as though they're trying to sneak up on the edge, pretending not to look as they spiral round, trying to catch it on the outswing, the outer arm of the Golden Mean. The galaxy spins down into a beach-stranded mollusc shell, into an atom of stone, down further into a galactic supercluster, You can hear the energy thrumming as your identity slips away. A minute and a half can be enough to see it all. Time enough to get close to the edge, anyway. -- Daniel Spicer

Daniel Spicer writes about music for The Wire, Jazzwise and other publications. He presents an FM radio show, The Mystery Lesson, playing avant-garde improvised music. He also performs in the chaotic electro-acoustic improvising sextet, Bolide. He lives in Brighton, UK.

Collodion Error by Richard Youngs & Andrew Paine is licensed under a Attribution-Noncommercial-Share Alike 3.0 United States License.
So far 0 comments about this album. Add your 10 cents!