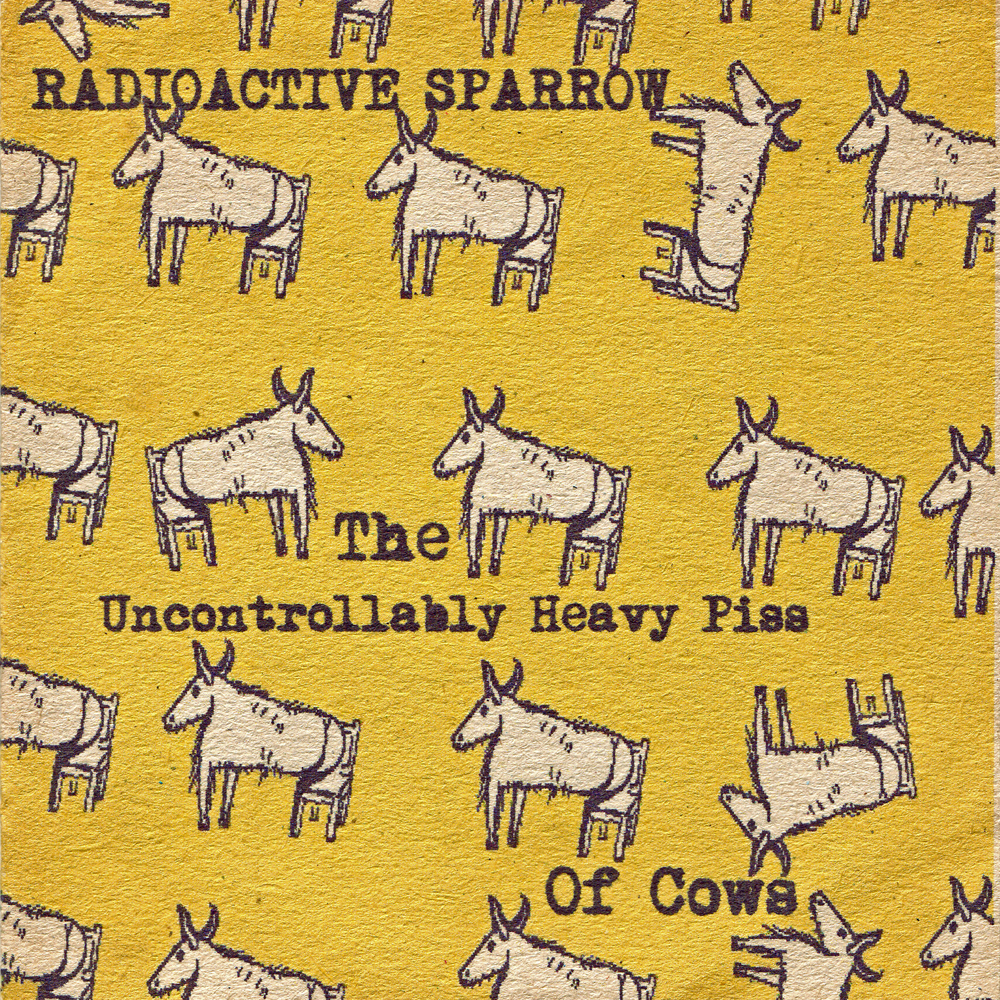 Originally UACD-002 on Kakutopia’s now deleted 50-title Unsound Automatic imprint, The Uncontrollably Heavy Piss Of Cows (compiled in 1998) was Radioactive Sparrow’s first attempt for 10 years to assemble a ca. one-hour greatest hits package. By this stage they had made 67 albums of completely improvised Special Rock and close to 1,000 songs, so any endeavour to bolus a clammy trundle was necessarily ridiculous. The exercise was undertaken by requesting the three longest-serving members (Bill Bargefoot, Tony Gage and Heaving Stews – still the band’s core trio) nominate their five favourite tracks, out of which, perhaps, an awkward trolley could be cribbed. The intention at the time was that this be the first annual ‘Best of…’ whose yearly unfolding might reveal a more complete character study, then, of a (nay, the world’s greatest) Kak group.

This first selection is lumped around a late-80s, fibrously chewy centre, which is odd considering the illustrious peaks of the 1990s by then achieved – where is ‘Hermaphrodite’? … ‘I’m Afraid That You’ve Been Asked To Leave The Band’? ... ‘Balls Are Found Between Your Legs’? … ‘Whose Side Are You On, Twerp?’? … Nothing that features such Kak legends as Bernard Harrison, Bruco Lava or Chris Hartford… For more than one member, 1992’s All The Ideas In The World represents a creative pinnacle, but such releases function as organic holes, deep inside of while operates a network of cruxed collectivity that cannot be nippled to a crest of deft reveille. That said, the selection has endured as a viable statement that proffers ample sample. For now. The group have long ago charged THF Drenching with the project of making a one-hour catch-all, one day, but first, eventually, he needs to be in possession if the completed facts.

Here is the original sleeve note:

And it came to pass that between 1980 and 1998 Radioactive Sparrow did record 67 albums. All of restrictive undertaking, taking the actual band under their music. From now on into the future Unsound Automatic will release an annual catalogue, describing with each volume a different possible interpretation.

For the first of these, the still-active members of the band were asked to vote for their top 5 duplications in choice of recital, and therefore a unanimous position could now be arranged.

For those who seek recordings of the group’s many reports from the very frontline of improvisational context, there is little here to rub up against; but for they who seek amusing puerility in rock, there is much.

Richard Bowers – Moog on ‘Shark Warning!’; keyb on ‘You Cunt’; drums on ‘Keep In Touch’

Guy Williams – drums on ‘Shark Warning!,’ ‘Spinning Bowl,’ and ‘My Book Of Poetry’

Paul Greenlaw [‘the’ Paul Greenlaw, like off of Will Oldham rekkids? Or not?] – banjo on ‘Elephant 2000 Magasin’

The whole back catalogue of Radioactive Sparrow is being serialized at kakutopia.com – updated and improved digital remasters of tracks featured here will be available from the original albums posted there. For reasons of ease, this post features the digitized masters as of early DIY technology in its 1998 possibility, which retain in some cases an over-enthusiasm as per normalization and aesthetic unshaven-ness. Rough shod. While looking forward to more maturely rounded reissues, appreciate, here perhaps, the unique version of, say, ‘Mono’, which inadvertently contains its very ghost as if naturally engrained.

The title of this compilation came from a description Tony Gage once offered of what Radioactive Sparrow sounded like on one particular occasion; it subsequently appeared as a lyric that forms part of a litany of reflexive tributes and acknowledgements featured at the tail end of the band’s cover of Madonna’s ‘Vogue’, here named ‘Loads.’ A compilation of highlights from the first decade of the new century is due at the end of this year, working possible titles include I Accuse You Of Sex and Tesco Closes On Your Prick.