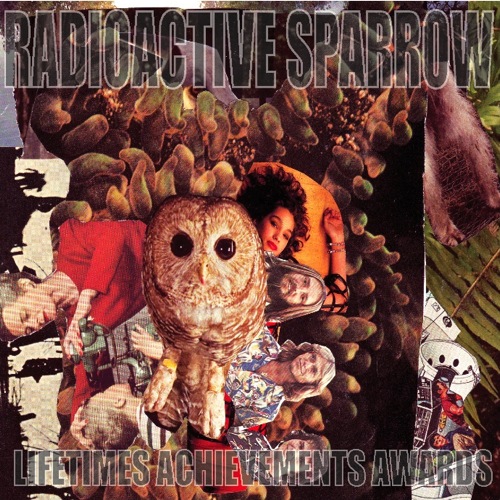 After an hiatus of six years. In 2003, Radioactive Sparrow decided that it was time to lay down the sore dagger, recording a finalled, 83rd joignt called, knowingly, Suicide Bomber. Yes, they was sad, but they knew it was dangerous to carry on with part of the rear bracket badly craven through voraciously acidic moistening.

Then, suddenly in 2009, a gravitational poise began to engage the core trio of Bill Bargefoot, Heaving Stews and Tony Gage. Tony had found and proven that all other avenues of rock & roll were distinctly lacking; Heaving had been subject to a long-term re-energizing of the limbs at the inner grasp – he was pregnant… with scale-ectric performativity!; and Bill had simply grown disenchanted with the racket that clutters the non-idiomatic Friday with half-bearded tit-fucks.

On Hallowe’en 2009 they assembled to commit this, their now-84th all-brow. Leech, absorb. Tony Gage posted a video for ‘Return of the Beast’ here:

Impossibly, the world’s most favourite group are back. Battling against all advertising, the core trio who established themselves as the Kak-R-Phonic dream team 20 years ago, have bled these thirteen darkly careening, impressionistic essays from Earth’s creaking sow. 13 is the cool number of tracks by entertainment crews these days, and paradoxically half of that is 6.5, the quantity of years that has gone on since Bargefoot and Gage threw the petroly rag into the flaming mouth of social currency in what they couched (illegally) as an act of self-immolation. As it turns out, in the history of things as they have come to pass in a world that appears to carry on, the band were merely “out of time”, realizing with eclipse that their hearts begged sojourn away from the quarry face at a neatly buoyed half-way point in their own lives as personal people. As the album got underway on the modishly Welsh Saturday, the rapidly emerging joy was so thick you could cup it with a life, which, as it happens, is how it began to be recognized: God snipping the ticker tape as sera more neatly laid clasp to the second pin-point!

Lord bless the following amazing people who understood that this is what they invented rock & roll for during a siesta of this foggy board-clam: Drenno, Bruco, No Wind, Float, Fletch, PLU, Fidel, Jean-Louis Gauthier, Marianne Morris, D’Silva, Woodrow, and, most excellently because of the day’s morning antics, Nat Roe.

Not forgetting the other members of this band whose involvement is bound to catch up with they ass: Bowaz, Blunty, Lepro, Luno, Wats-On, Hundrud Fingaz, Blerrell, Boner.

There’ll be more of this.