It Crowd Remix by Pocketmaster 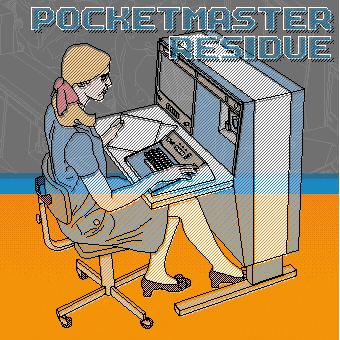 Used to lowtech manipulations and samples from old chips, toys or other various sources, this time, Pocketmaster chose to surprise us by preserving the sound card's raw sound, without manipulation. A certain image-radical-purety!
The album is thus concocted entirely from the Game-boy and Commodore 64 duo, spiced up with all sorts of samples and a few old synthesizers, all recorded in a record time. The result is a twelve tracker, fresh and joyful, in the spirit of the duo's over-vitamin live performances.

Yet, the two artists don't hesitate to have their pieces drift through several musical universes. In addition to a track remixed my Stu, and a Naomi Sample cover, Residue offers the listeners a magnificent cover of the "It Crowd" series' credits.
Contrary to its title "Residue", which means leftover, or relics, this first album is innovative and illustrates the wacky duo's wish to always surpass themselves.

It Crowd Remix by Pocketmaster is licensed under a Attribution-Noncommercial-NoDerivatives 2.0 France License.