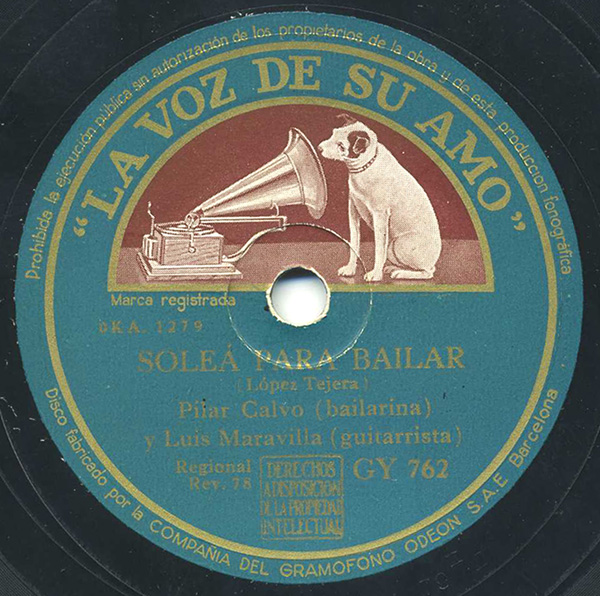 Recently, I’ve been transferring some of my best 78s of flamenco and cante jondo music of Spain for a project I’m working on. It’s been really rewarding to delve into it so deeply. I figured I’d share one of my favorites.

Where to begin with flamenco? Despite it being the most well-known folk music of Spain, its origins seem to be constantly debated by experts. Unquestionably it is the music of the Gitanos (gypsies), Europe’s outcasts for centuries, who despite years of persecution, found a home in Andalusia. Over time, as persecuted Jews and Moors joined their communities, their ballads changed. Some maintain that flamenco singing most likely developed as a response to anguish, injustice, and oppression. Despite years of flamenco recording - with the earliest records being considered the closest to “true” flamenco - the music remains essentially a live experience; music and expression meant for an intimate juerga. However, some records by masterful players and singers certainly captured some of the power of a live flamenco experience, in my opinion.

The cantaor and tocaor, the flamenco singer and guitarist, are only part of a larger equation. Equally as important in flamenco performance and the focus of today’s post is the bailaora (or bailaor, as the case may be), her dance, the clapping (palmas), and the castanets.  The presence of castanets in flamenco is a hotly contested topic - for me, the best part of this 78 is the footwork.

The vast majority of early flamenco 78s are simply guitar and voice. This was probably due to primitive recording technology - both the singer and guitarist had to stand right in front of a massive recording horn (or microphone). Flamenco 78s that just feature baile flamenco are particularly special, like this one, recorded in 1948 by Ms. Calvo and Mr. Maravilla. Despite the late date, the performances here are stellar - the interplay between Maravilla’s compás and Calvo’s feet is wonderful, and it builds to a thunderous, powerful crescendo. Just as powerful as any singer might achieve, I think (though I freely admit that I’m no expert, and some might consider this far from authentic). Perhaps this is because Calvo and Maravilla (born 1914) were husband and wife.

There are loads of books, magazines, and online resources on flamenco. There are numerous collections of vintage flamenco on CD as well, though I cannot vouch for their transfers. However, one name you can trust is Arhoolie, and they have a nice CD available here.