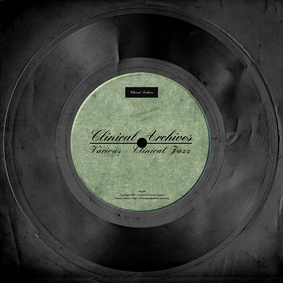 "Clinical Jazz" is an eclectic and illogical compilation.
Range: ....from "clinically" traditional jazz directions....... up to unclassable and clinically indefinable "jazz" forms.

'Phlox' is a fusion/prog rock band from Tallinn, Estonia, formed in 1999 by Kristo Roots (g), Raivo Prooso (perc), Rainer Kapmann (dr) and Priit Holtsmann (b). Although the line up has gone through numerous changes over the years, most of the members usually have close ties with 'MKDK', a jazz-rock/avant garde record label, non-profit organization and movement of artists and musicians, who frequently switch from one band to another, especially between 'Phlox',' BF' and 'Lippajad'. The first album, "Fusion", was recorded in late 2000, shortly after that Priit Luming (sx, cl), Allan Prooso (perc) and Pearu Helenurm (kb) joined the group. During that period the band’s music became more improvisational, from completely deconstructing their own compositions to having shows where they tried to avoid anything resembling rhythmic structures or harmony. In May 2004 the band's second album "Piima" ("Milk") was recorded in the MKDK Studio, with Margo Pajula on drums and Kalle Klein on sax, using strictly vintage analogue equipment. In 2007, with Madis Zilmer of fusion group 'BF' on drums, 'Phlox' completed its latest album to date, "Rebimine + voltimine" ("Tearing and folding"), which saw the band’s return to straightforward tight structured fusion and prog.

S6jajalgne by Phlox is licensed under a Attribution-NonCommercial-NoDerivatives (aka Music Sharing) 3.0 International License.