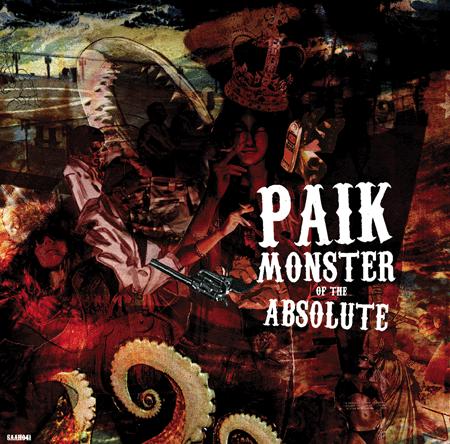 The abandonment and subsequent plight of America's many major urban centers is well documented, but nowhere else is this manifest to its extremity as in Detroit, Michigan. Although there have been hints of a resurgence, downtown Detroit exists in an advanced state of decay and has for many years, its blue-collar past and collection of pre-Depression skyscrapers often referred to as an American Acropolis. For Paik, the very epicenter of this deterioration is precisely where they call home. From the erosion of concrete and steel comes a certain inspiration, a parable that has fueled Paik's ongoing quest for beauty amongst ugliness and chaos. Since their incept in 1997 and across four full-length albums and a smattering of singles and compilations, Paik have studiously advanced and mutated their sound. Evolving from their embryonic shoegaze-inspired melee into sprawling, heavy stoner/psych/drone hybrids as evidenced on 2003's epic Satin Black, Paik have an uncanny ability to completely shred the atmosphere while coaxing out blissfully sonorous melodies from their thunderous caterwaul. Pulling back the reigns just a bit, Paik funnel their supersonic cyclones into a tightly focused box of thunder with Monster of the Absolute, their greatest balancing act of melody and dissonance to date.

Utilizing the tried-and-true power trio format, Paik are certainly not at a loss for conjuring up blistering volume and powerful rhythms. It is their particular incantations, evoking warm melodic portraits amongst a firestorm, which truly sets them apart. Few bands are as adept at evoking the inherent symmetry in otherwise clashing emotions as Paik, and it is this wedding of sonic disparity simultaneously (i.e. without the alternating loud/quiet crutch utilized by so many post-Slint/Mogwai instrumental acts) that is so breathtaking. Previously content with stretching out their explorations into lengthy, repetitious exercises, Paik have honed things down on Monster of the Absolute to a much more concise format. Oozing forth with a beautiful drone passage of tightly woven feedback and mouth harp, Paik launch into Monster of the Absolute with "Phantoms", a riff-wrenching yet remarkably heady tune. Distorted bass and barreling drums augmented by tympani and tambourine lay a solid foundation for chiming guitar lines to cut through the din. After the slow-building tension and fury of the title track "Monster of the Absolute", Paik slink into soft corridors pillowed by warmly droning guitars and pattering percussion, solemnly bowing out in a remarkably mellow comedown.

No other band mixes together such otherwise polar extremities with such grace and sense of purpose as Paik. Monster of the Absolute is the most accessible cinematic pummel of their career.

Phantoms by Paik is licensed under a Attribution-Noncommercial-No Derivative Works 3.0 United States License.