Upside Down by Oblivian Substanshall 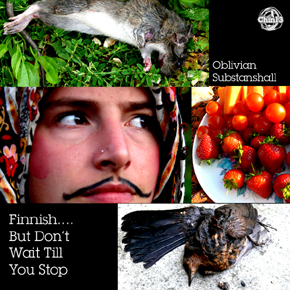 Surrealism as a method of art has become almost synonymous with advertising over the past 20 years, the original movement's power to disturb and shock eaten away by the overuse of images of talking fish, lobsters in spats, and coat-hanger headed people to sell Tampons, Baked Beans and Spandex trousers.

One area of artistic practice where Surrealism has remained relatively undisturbed by the influence of advertising, however, is sound and music. This is fortunate for us, because the artist who goes by the curious monikers of variously TOSS, Tengemort, and Oblivian Substanshall is undeniably a dyed-in-the-wool Surrealist. A hugely prolific artist in radio, music, cartoons and painting, he has developed, through his regular broadcasts on Soundart Radio and releases on Chinstrap, built an aesthetic that is as singular as it is unpredictable.

The Surrealism of the mysterious figure of Oblivian Substanshall, who is sometimes seen talking into biscuit tins, is not the Surrealism of advertising, but closer to the comic and disturbing imagery of Max Ernst, whilst also harking back to the English nonsense tradition of Lear & Carroll.

His latest release on Chinstrap "Finnish But Don't Wait Till You Stop" is his most diverse and accomplished release yet. A veritable treasure trove of ideas and creative avenues, Mr Substanshall is just as adept in whipping out an unforgettable pop song as he is in weaving a nonsense narrative or a clanging, Beefheart-esque guitar driven opus. The diverse nature of this release is unified first of all by his distinctive aesthetic, and secondly by his voice, which is instantly recognisable, simultaneously as warming as a cup of tea and disturbing as a naked, wizened, bleeding dog-lady turning up in your bed.

So sit down, pour your favourite beverage, and immerse yourself in the barmy and beautiful world of "Finnish...."

This album comes with a new video from Chinstrap's resident film-wizard Martha Moopette, using elements of every track on "Finnish...." to create an intense, strange and hilarious film collage of death and digestion. Featuring Amie Willingale, Talulah Lotus, Autumn Poppy, and a range of dead animals from the streets and fields of Bridport.

Upside Down by Oblivian Substanshall is licensed under a Attribution-NonCommercial-ShareAlike 3.0 International License.