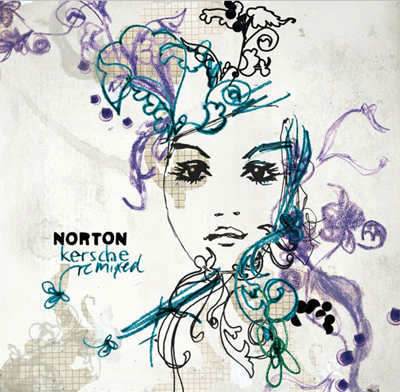 Norton are addicted to remixes. In 2005 they released a remixed version of their debut album only with remixes made from Portuguese musicians. Not even a year had passed since they released Kersche, they presented a new remixes release.

Kersche Remixed is, as the name announces, a remixed version of Kersche. People from all around the world were putting new visions, new sounds, new atmospheres in Norton songs. In this record you travel around the world. From Iceland with FM Belfast, side Project of Örvar Smárason from Múm, to Malaysia with Muxu, Germany with Corwood Manual, Hidden Letters, Nuuk and Trondheim, Portugal with Loto, Stereoboy and Daily Misconceptions, Sweden with Lost Room, U.S.A. with Cars & Trains and Transient, England with Will, Switzerland with And Me and Netherlands with You Echo.

Cinnamon & Wine (Loto Remix) by Norton is licensed under a Attribution-NonCommercial-ShareAlike License.
Based on a work at https://archive.org/details/aer012