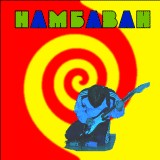 Nambavan lives in the Russian republic of Tatarstan. He began composing music on his first pc in 2000 and got expelled from guitar lessons for not remembering the songs a few years later.

Nowadays he works with his pc, a $80 guitar and a Casio keyboard. His musical diet consists of Blondie, the Sex Pistols, Cerrone, Sonic Youth, Jimi Hendrix, Iggy Pop, The Doors, Giorgio Moroder, Donna Summer, Madonna, Supermax, and the Bee Gees. This 4-track ep is the result.

Or in his own, electronically translated, words:

"I live in Russia, the city of Kazan (republic Tatarstan), I have begun will compose music in 2000 on the first computer. I always wished to compose music and consequently at school I have entered the name on lessons of a guitar, me from them have expelled for that that I could not remember well a song which there played. Then I had a powerful computer on which I of year 3 tried{tasted} will compose better music.

One year ago I have bought {purchased} to myself the Chinese guitar for 80 $ and synthesizer CASIO LK-45, and I have very much taken a great interest the punk and disco in music. Listened: Blondie, Sex Pistols, Cerrone, Sonic Youth, Jimi Hendrix, Iggy Pop, The Doors, Giorgio Moroder, Donna Summer, Madonna, Supermax, Bee Ges. Has saved up{has collected} money for guitar effects and has wanted to do{make} similar a sound on these musicians.

At us in city music is badly developed, very few people which are engaged in a writing{spelling} of own music.