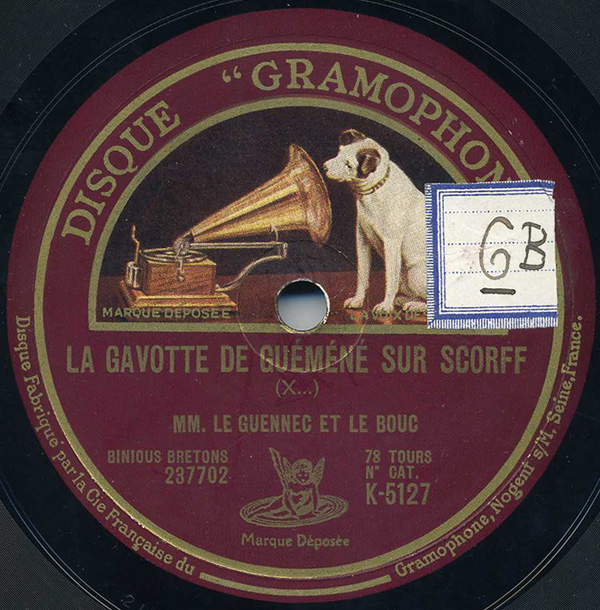 If you haven’t heard Brittany bagpipe music, you’re in for a treat. It’s different from others simply because the older, small-in-scale Breton pipes, known as the binioù (or the binioù kozh), are tuned very high - the lowest note on the binioù is equal to the highest note on the typical Scottish bagpipe, for instance. As with this piece, a gavotte meant for folk dancing, the pipes are typically accompanied by a bombarde, an oboe-like reed instrument tuned an octave below the binioù. The two play together in the traditional style, overlapping musical lines.

This track appears to have been recorded by two Gramophone engineers, Edward Fowler and Douglas Larter, in January of 1927. The title refers to the small village of Guémené-sur-Scorff. And, I should mention that the flip side of this record, equally as nice, is featured on the Ace & Deuce of Pipering CD released by Heritage…which looks to be out of print now, so best to search the usual avenues for that one.

This week’s mail brought me the latest Dust-to-Digital 2-CD release Victrola Favorites, which is just a beautiful work of art. I highly recommend this as well as the other D-to-D releases that I’ve previously raved about (Black Mirror, and there’s also Melodii Tuvi). Friend of the site Rob Millis put this together with his partner Jeffrey Taylor and the accompanying 100+ page book is museum quality.