Horszowski was born in Ukraine and was initially taught by his mother, a pupil of Karol Mikuli. He became a pupil of Teodor Leszetycki in Vienna at the age of seven.

In 1901 he gave a performance of Beethoven's Piano Concerto No. 1Warsaw and soon after toured Europe and the Americas as a child prodigy. In 1905 the young Horszowski played to Gabriel Fauré. 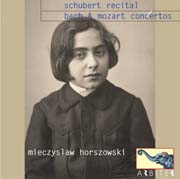