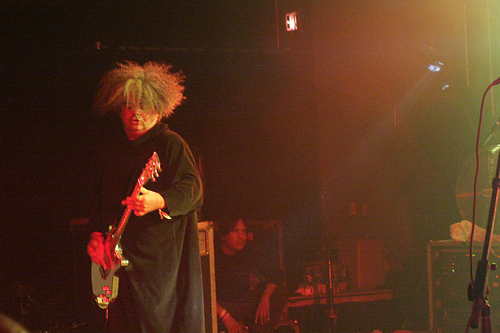 Live recording from the Sept 11-13 All Tomorrows Parties at Kutshers resort in the Catskills, broadcast over WFMU. The Melvins' Saturday, September 12th set at stage 2 of ATP was the first chance I've had to check out the post-2006 lineup of the band, with 80's mainstays King Buzzo (guitar/vox) and Dale Crover (drums) actually merging their band with Big Business (Coady Willis on second drums, Jared Willis on bass). To say they slayed would be an understatement, and in all truth this is the only band that could have one of its members perform in a Snuggy and not lose one fraction of heaviness. We've got two approved MP3s from the set: "Zodiac" and "Kicking Machine" engineered during WFMU broadcast by Scott Konzelmann, tracks re-mastered by Scott Williams 10/7/09. -Brian Turner / WFMU