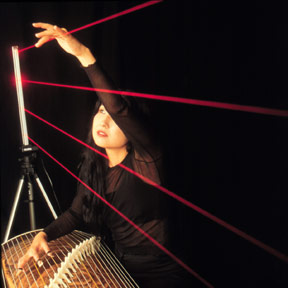 –  About the artists: Miya Masaoka is a composer, inventor of the Laser Koto and LED Kimono, and musician who has recorded with Fred Frith, George Lewis, Pauline Oliveros, John Butcher, Gino Robair, Carla Kihlstedt and has performed with Wadada Leo-Smith, Pharoah Saunders and the Berlin Opera. She learns from insects about sound and movement and explores the physiological responses of plants, human brains, and her own body.  She is founding director of the San Francisco Gagaku Society.

Kenta Nagai crafts sound and vision from his base in NYC. His fretless guitar playing is featured on Eugene Chadbourne’s “Guitar Festival Summer 1999”. On shamisen, a traditional Japanese string instrument, Nagai has performed widely including Carnegie Hall and the Hirshhorn Museum at The Smithsonian Institute. From 1999 until 2002 he was a composer in residence at The Cave Gallery in Williamsburg, Brooklyn. 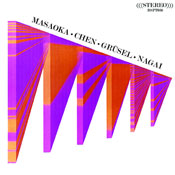