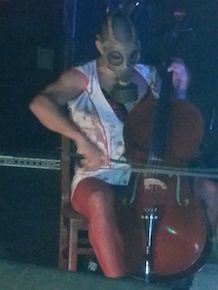 Halloween 2012, Frankenstorm Sandy wreaked havoc on many parts of New York, the city was brought to a halt in many areas but the members of Man Tease would not allow mother nature to overcome them with her wrath.

Joined in la resistance against nature, were two groups from Japan, Tokyo's Mermot sounds film and Osaka's ZZZ's both whom seemed fitting to share the bill with Man Tease.  All this went down on Halloween night in the year 2012 at the appropriately named Party Xpo in bushwick.

Turn it up and listen to the raw fury!