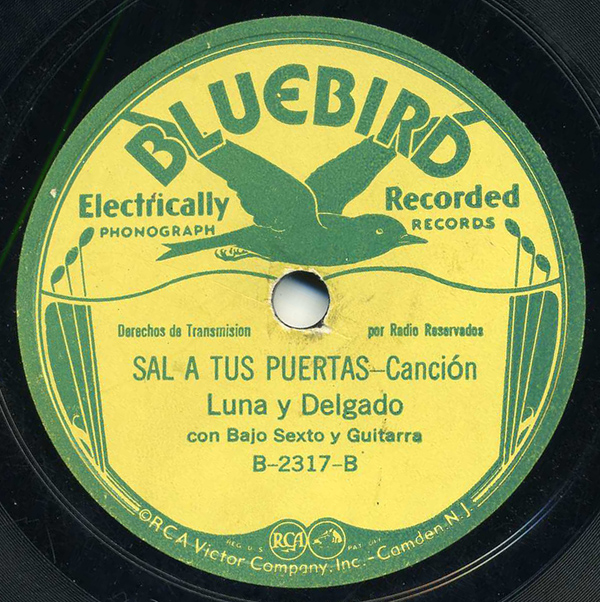 Over the next couple of weeks, I thought I’d revisit some music from regions I hadn’t been back to since the early days of the blog. With the spirit of Lydia Mendoza in mind, and after a recent viewing of Chulas Fronteras instigated by my friend Chimatli, I thought I’d spin some more early Tejano music from the Texas-Mexico border.

Alejandro Luna and Regino Delgado recorded several sides for Victor’s Depression-era, budget-conscious subsidiary label Bluebird in the mid-1930s, including this one, “Sal A Tus Puertas” (meaning “Come To Your Doors” – thanks, Dax). This particular track was recorded at the Texas Hotel in San Antonio on January 25th, 1935, and the duo accompany themselves on guitar and bajo sexto.

The Bluebird “ethnic” series began in about 1934 and lasted until 1939, totalling about 1400 records. The recording industry had been crushed by the Depression, but Victor, in large part due to their Bluebird subsidiary (which also released country, blues, jazz and pop), were able to ride out the difficult times. For example, in the late-teens, it was not uncommon for a 78rpm record to cost $1.00, or even $1.25. Very pricey, considering. Well, by the early 30s, with sales in the tank and record companies folding left and right, Bluebird records went on sale for 35 cents.

Finding Mexican or cajun records on the Bluebird ethnic series is possible, but it is quite difficult to find them in decent condition. Today’s track has some wear, but we embrace surface noise here at Excavated Shellac, though we try to soften it up just a little bit! Plus, it’s an enjoyable piece of music that has not yet been compiled or written about…