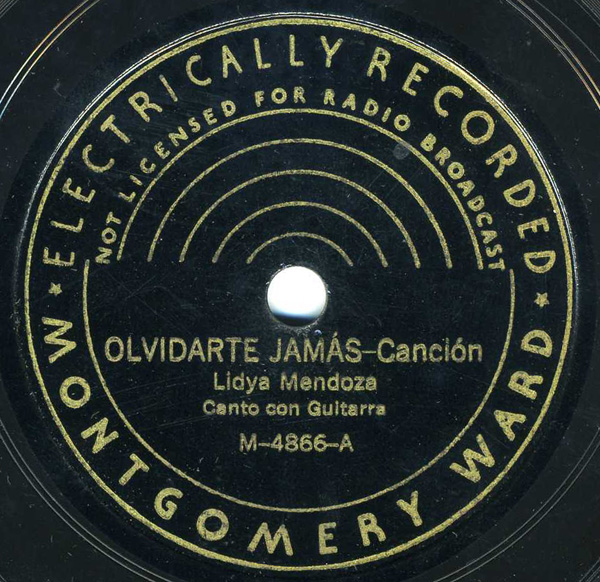 There’s precious little that can compare with the unmistakable voice and guitarra doble of Lidya Mendoza, also known as “La Alondra de la Frontera,” or “The Lark of the Border.”

Lidya (commonly known as ”Lydia”) was born in 1916 and began singing with her family in the Plaza del Zacate of San Antonio at a young age. In 1928, the Mendoza Family recorded 10 sides for the Okeh label. However, in the early 1930s, she signed a 10 year contract with the Victor subsidiary Bluebird, and recorded hundreds of tejano classics.

This canción, uncompiled as far as I know, was recorded on August 12th, 1935, in San Antonio’s Texas Hotel. The title translates to “I Will Not Forget You.” Her 78s can be found, but most often in one condition: trashed! They were well loved, and finding a decent copy of any early Mendoza is a good thing.

She is a legend, and there’s little else but hyperbole I can add to her biography. For more, go here. Or here. And if you’re interested in music, please go to the Arhoolie label and check out their fine Mendoza releases.

As a recent reader noted, Lydia Mendoza passed away on December 20, 2007. The New York Times obit can be read here.